Scientists at the University of Wisconsin–Madison — including veterinarians, medical doctors, scientists and students at all levels of the university — study animals for three reasons:

Researchers choose to use animals in their labs only when necessary — when alternatives such as computer models or cells in petri dishes are insufficient for answering their questions, when experiments are too dangerous for humans, and when what is expected to be learned is judged to be a useful and ethical justification to involve animals.

When animal research is necessary, plans for that research are studied and refined by university committees to minimize the number of animals used and the potential distress for the animals. Specially trained veterinarians and staff care for animals at UW-Madison, and labs are held to comprehensive laws and rules by oversight from the U.S. Department of Agriculture, the National Institutes of Health and others.

UW-Madison labs make sure animals in their care have space, companionship and the enrichment offered by toys and exercise as research protocols allow. Work with animals at UW-Madison and elsewhere has taught researchers how best to provide a good environment for research animals, and most improvements in animal welfare have actually come from the scientific community.

By applying the collective ethics of knowledgeable scientists and striving to improve animal research by whenever possible reducing the number of animals in labs, replacing them with alternate avenues of research and choosing the least invasive useful methods, UW-Madison scientists continue to conduct research that benefits people and animals alike. 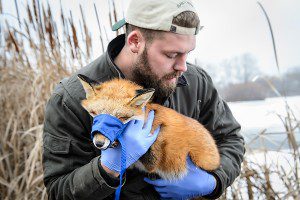 Animal research is not confined to a laboratory. Many of our research programs are field studies, observing and examining animals in their own habitat to understand their behavior and environment and — as in the case of a study of campus foxes and coyotes — the effects of more frequent interactions with humans.